Wordy is a word guessing game (similar to Hangman) where you must guess a five-letter word in as few tries as possible.

At the start of the puzzle, you'll see an empty grid, five* squares wide.
(*We've also included some 4 and 6 letter Wordy puzzles. You can find some of these in the Wordy Special Issues.)

Use the on-screen keyboard to type your guess into the first row. If you make a mistake or change your mind, you can tap on filled squares to erase them.

If your word isn't in the game's dictionary, you will be prompted to erase it. (Most five letter English dictionary words are recognised.)

Once you've submitted your guess, the game will reveal which letters are correct.

You can then make another guess, based on the revealed information and the remaining unused letters on the keyboard.

There's no limit to the number of guesses - but most words should be able to be guessed by a process of elimination within five or six tries.

You can restart the puzzle from scratch by tapping the ⋮ icon at the top of the game screen and selecting RESTART from the menu.

🟧 The orange square is the cursor - this is where the next letter you type will be entered. You can tap any square on the current row to move the cursor to that square.

🟪 A purple square in a submitted word indicates that this letter is present in the solution, however it's not in the correct position in the word you've submitted.

🟩 A green square indicates that this letter is correct (it's in the solution, in the specified location).

⬛ A dark gray square indicates that this letter is not used in the solution. Unused letters are marked on the keyboard once found.

If you're stuck on a Wordy puzzle, you can use coins to obtain hints.

Hints can be used by tapping on the 💡 icon in the status bar area at the top of the screen.

The cost (in coins) to use each hint is printed under the icon. 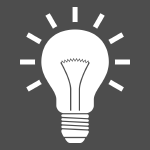 Use this hint to automatically fill the next unknown letter in the word (squares that have already been solved - i.e., where a green letter has already been shown in a previous guess - are skipped).